SINGAPORE – From January 28 2016 onwards, the MASCK flagship store in Singapore, will show exclusive collections by LASVIT. Designed in partnership with the Campana Brothers, the Fungo Chandelier and the Candy collection combine LASVIT’s mastery of the traditional glass-making craft with cutting edge technology and innovative design. Find the MASCK store in the centre of Singapore’s lifestyle district at 63 Mohamed Sultan Road, Robertson Quay.

The Fungo chandelier was inspired by the fascinating shape of a mushroom growing on wood. Yet this mushroom didn’t grow in the forest, but was discovered in the basement of Lasvit’s glassworks, where an ancient wooden glassblowing mold had succumbed to the ravages of humidity. The Campana brothers chose to blend this newfound accidental theme with Lasvit’s glassmaking tradition and fuse their techniques with natural materials. The resulting artwork displays a striking contrast between the formal rigidity of the chandelier’s wooden structure and the blown-glass that appears to emerge spontaneously from the wood.

Image above is one of the Campano Brothers, Hamberto. The Fungo Chandelier at MASCK store, Singapore and Hamberto gave a short presentation of the new creation: The Fungo and The Candy Collection Chandeliers. The Sphere Lolli Chandelier is currently on a tour-exhibition in Europe. 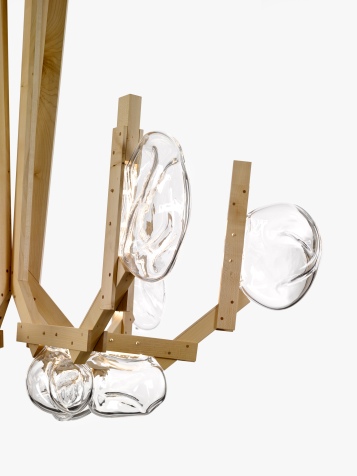 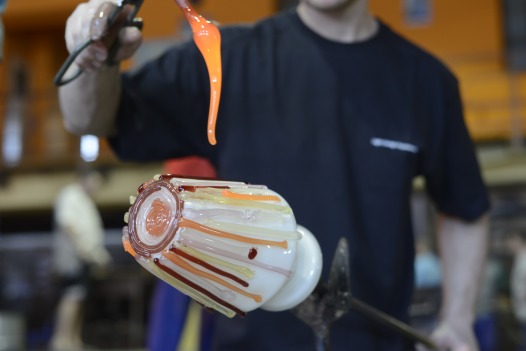 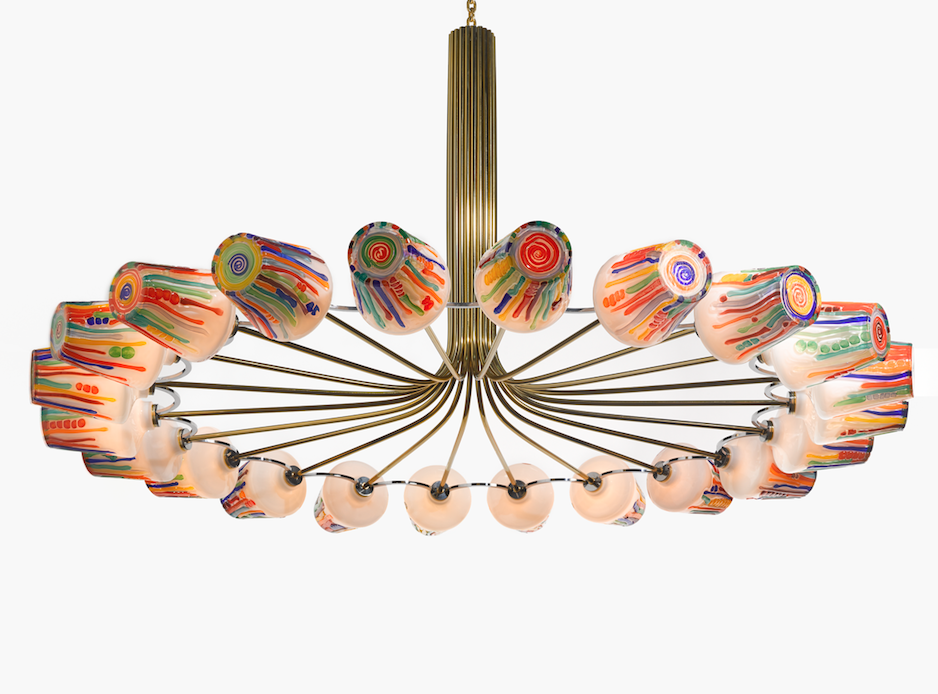 The Candy collection builds on the colourful universe of the Campana Brothers’ Sushi series, but explores and expresses it through glass, a material that has fascinated them since childhood. They found inspiration for this collection in the colourful candies sold in popular markets in Brazil. This initial concept was enthusiastically received by Czech glass-masters, always ready to explore new techniques and visions. The Candy Collection includes Sphere chandelier, Ring chandelier and Lollipop table lamp, all conceived and produced in hand-blown glass and metal.

Campana Brothers — founded in 1983 in Sao Paulo by brothers Fernando (born 1961) and Humberto (born 1953) Campana, Estudio Campana became famous for its furniture design and the creation of intriguing objects such as the Vermelha and Favela chairs and has grown to include Interior Design, Architecture, Landscaping, Scenography, Fashion, Artistic Partnerships and more. The Campanas work incorporates the idea of transformation, reinvention and the integration of craftsmanship in mass production. Giving preciousness to common materials carries not only the creativity in their design but also their very Brazilian characteristics – the colors, the mixtures, the creative chaos, the triumph of simple solutions. Campana pieces are included in the permanent collections of the Centre Georges Pompidou in Paris, the MoMa in New York, the Musée Les Arts Décoratifs in Paris, the Museum of Modern Art in Sao Paulo and also the Vitra Design Museum in Weil am Rhein. The brothers were honored with the Designer of the Year award in 2008 by Design Miami and the Designers of the Year Maison & Objet award in 2012. That same year they were selected for the Comité Colbert Prize in Paris, honored at Beijing Design Week, received the Order of Cultural Merit in Brasilia and were awarded the Order of Arts and Letters by the Minister of Culture in France. In 2013 they were listed among the top 100 most influential Brazilian personalities by Forbes magazine, and in 2014 Wallpaper* ranked them among the top 100 major players in design.

The brand Lasvit, founded in 2007 by Leon Jakimic, sheds a new light on Bohemian glass and takes it into the next millennium. Lasvit combines the authenticity of glass with innovative technologies and creative craftsmanship. In a few short years, Lasvit has established itself as the authority delivering bespoke lighting sculptures and art installations made from hand-blown glass. Collaborations with renowned designers and artists produce also unique glass collections. Nendo, Ross Lovegrove, Arik Levy, Daniel Libeskind, Maarten Baas, Czech legends Rene Roubicek and Borek Sipek are among those who choose Lasvit in order to embody their unconventional artistic vision, endow it with the precision and mastery of our glassmakers, and produce impressive creative oeuvre. This is a manifesto of Lasvits’s uncompromising mission: To transform glass into breathtaking light and design experiences.