A total of five shortlisted artists gave a presentation of their works and the inspirations to producing each piece of sculpture and installation. Picture below shows shortlisted artists for the Prudential Eye Awards; from left to right: Huang Po-Chih, Yang Mushi, Ms Honor Harger (Executive Director of ArtScience Museum), Sareth Svay, Santi Ariestyowanti and Dyatmiko Lancur Bawono.

Artist and entrepreneur Huang Po-Chih (黄博志) who has spent his most of his childhood growing-up at the countryside of Taiwan, is now focusing his projects on the production and manufacturing of products; e.g. garments and agriculture. He has perused and documented his family heritage stories; his mother’s career and ancestry, and his family members. 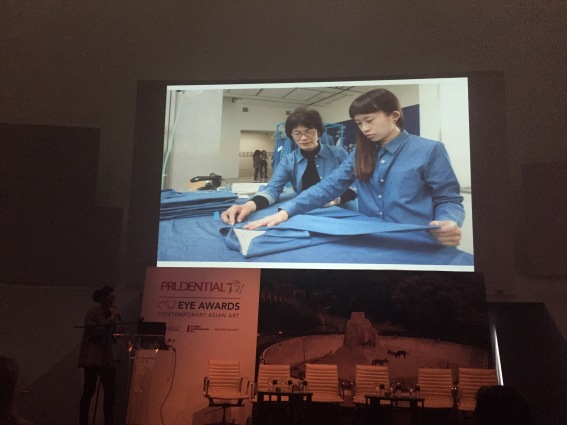 Huang also considers himself a farmer as one of his major projects is to producing lemons and to producing alcoholic lemon drinks. He has a bar to serve his cocktails and lemon drinks, and occasionally he collects inspirations from his farm and translates them into installations for exhibitions. Huang enjoys writings, paintings and to showcase his works at exhibitions.

Contemporary artists from Indonesia work full-time on their artworks and installations; e.g. a peddling bike which lights up lamps. indeguerillas receives commission works and they have exhibited their works in many regions in the world. 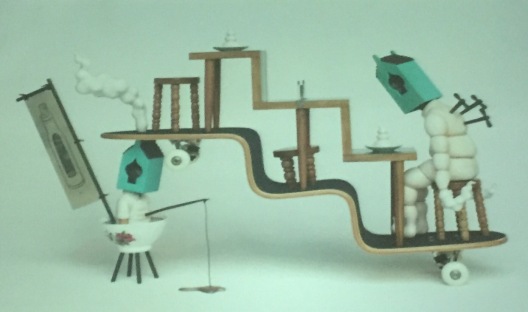 Yang Mushi– Black is his Friend

A young graduate from the Central Academy of Fine Arts in Beijing, Yang currently lives and work in Shanghai and Beijing, China.

Yang’s work includes paintings and installations; started in 2008 to 2014, a total of over 200 paintings. The colour, black, takes the theme of his perceptions and on the understanding of action, body, time and life.

The three keywords of Yang’s presentation at The Artist and I; Labour, Time and Body. 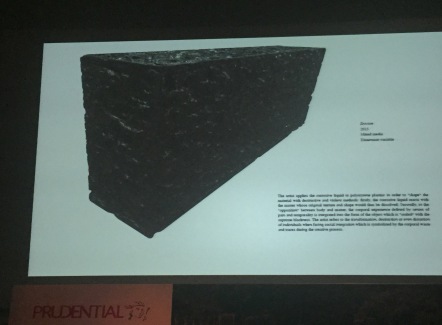 The Grind by Yang (picture shown above) installation is exhibited at the Prudential Eye Awards 2016. This is the fourth time that The Grind is showcased to the public, and it is always different from its previous showcase. The Grind is an ongoing project, a constantly evolving work.

When Yang was asked on whether his favourite colour is black, Yang commented that he would also consider using different colours in the near future.

And in regards to his preferred choice for wood as a medium of his work, ‘Because metal is expensive!’

Sareth Svay – Reflects on Poverty and Conflicts in Politics

Sareth Svay, a Cambodian artist who has showcased his artworks in many galleries around the world including Palais de Tokyo, Paris (France), a gallery renowned for avant-garde exhibitions. Svay channels his growing-up environment onto his sculptures and installations, an environment filled with ongoing social and political conflicts.

Mon Boulet 2010, a movable sculpture that was designed and built during his retrospective thoughts on poverty and fear, and constant violence. Picture: Images were taken during Svay’s presentation at the ArtScience Museum.

Svay’s installation, Warning House 2016 (picture shown above) and the rubber sandals are exhibited at the Prudential Eye Awards 2016 Singapore.