The Pritzker Architecture Prize was first established by The Hyatt Foundation in 1979 to annually honor a living architect whose built work demonstrates a combination of those qualities of talent, vision, and commitment, which has produced consistent and significant contributions to humanity and the built environment through the art of architecture. It has often been described as “architecture’s most prestigious award” or as “the Nobel of architecture.” The Pritzker Architecture Prize is as similar to the Nobel Prize (in Science and Medicine) and the Red Dot Design Award (in Design).  The prize takes its name from the Pritzker family, whose international business interests, which include the Hyatt Hotels, are headquartered in Chicago. 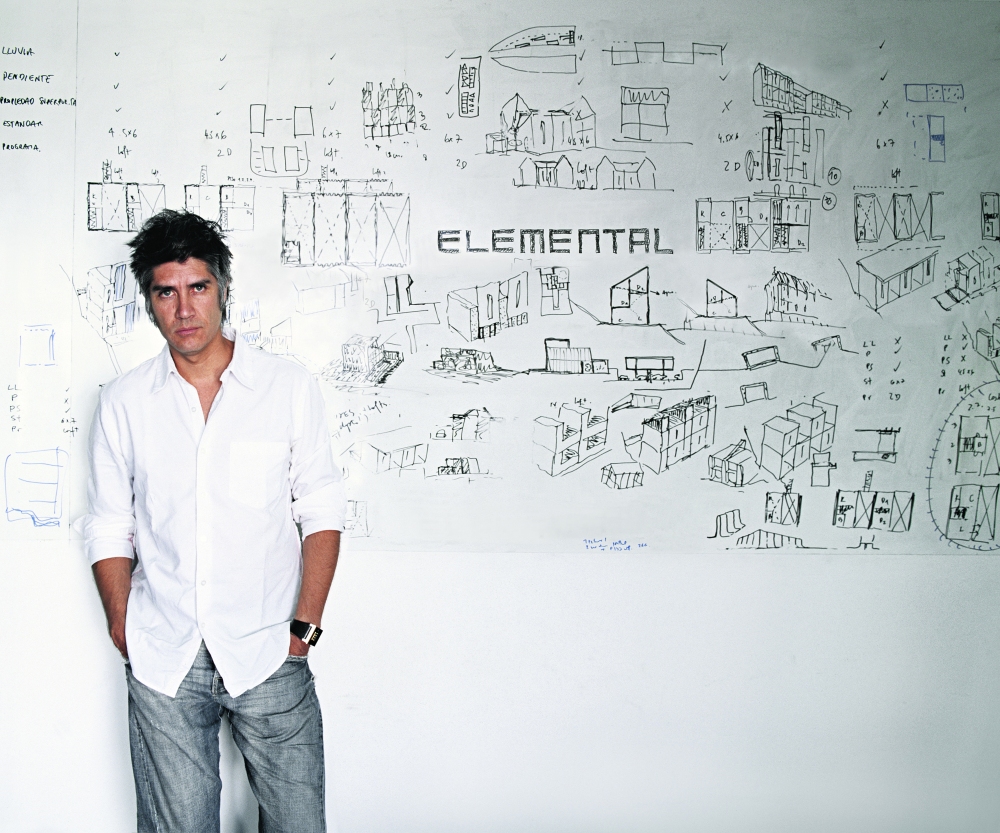 Alejandro Aravena of Chile receives the 2016 Pritzker Architecture Prize He practices architecture as an artful endeavor in private commissions and in designs for the public realm and epitomizes the revival of a more socially engaged architect.

Chicago, IL — Alejandro Aravena of Chile has been awarded as the 2016 Pritzker Architecture Prize Laureate. The announcement was made by the Chairman and President of The Hyatt Foundation, Mr Tom Pritzker on January 13, 2016. The formal award ceremony for what has come to be known internationally as architecture’s highest honor will be at United Nations Headquarters in New York on April 4, 2016.

The 48-year-old Aravena is an architect based in Santiago, Chile. He becomes the 41st laureate of the Pritzker Prize, the first Pritzker Laureate from Chile, and the fourth from Latin America, after Luis Barragán (1980), Oscar Niemeyer (1988), and Paulo Mendes da Rocha (2006). Mr. Pritzker said, “The jury has selected an architect who deepens our understanding of what is truly great design. Alejandro Aravena has pioneered a collaborative practice that produces powerful works of architecture and also addresses key challenges of the 21st century. His built work gives economic opportunity to the less privileged, mitigates the effects of natural disasters, reduces energy consumption, and provides welcoming public space. Innovative and inspiring, he shows how architecture at its best can improve people’s lives.”

Aravena has completed remarkable buildings at the esteemed Universidad Católica de Chile in Santiago, including the UC Innovation Center – Anacleto Angelini (2014), the Siamese Towers (2005), Medical School (2004), School of Architecture (2004), and the Mathematics School (1999). These energy-efficient buildings respond to the local climate with innovative, efficient facades and floor plans and offer the users natural light and convivial meeting places. Currently under construction in Shanghai, China, is an office building for healthcare company Novartis, with office spaces designed to accommodate different modes of work — individual, collective, formal and informal. In the United States, Aravena has built St. Edward’s University Dorms (2008) in Austin, Texas.

Since 2001, Aravena has been executive director of the Santiago-based ELEMENTAL, a “Do Tank,” as opposed to a think tank, whose partners are Gonzalo Arteaga, Juan Cerda, Victor Oddó, and Diego Torres. ELEMENTAL focuses on projects of public interest and social impact, including housing, public space, infrastructure, and transportation. ELEMENTAL has designed more than 2,500 units of low-cost social housing. A hallmark of the firm is a participatory design process in which the architects work closely with the public and end users.

ELEMENTAL is also known for designing social housing that they call “half of a good house,” in which the design leaves space for the residents to complete their houses themselves and thus raise themselves up to a middle-class standard of living. This innovative approach, called “incremental housing,” allows for social housing to be built on more expensive land closer to economic opportunity and gives residents a sense of accomplishment and personal investment.

In response to being named the 2016 Laureate of the Pritzker Architecture Prize, Mr. Aravena emailed: “Looking backwards, we feel deeply thankful. No achievement is individual. Architecture is a collective discipline. So we think, with gratitude, of all the people who contributed to give form to a huge diversity of forces at play. Looking into the future we anticipate Freedom! The prestige, the reach, the gravitas of the prize is such that we hope to use its momentum to explore new territories, face new challenges, and walk into new fields of action. After such a peak, the path is unwritten. So our plan is not to have a plan, face the uncertain, be open to the unexpected. Finally, looking at the present, we are just overwhelmed, ecstatic, happy. It’s time to celebrate and share our joy with as many people as possible.”

The 2016 Pritzker Architecture Prize Jury Citation states in part, “Alejandro Aravena has delivered works of architectural excellence in the fields of private, public and educational commissions both in his home country and abroad…. He has undertaken projects of different scales from single-family houses to large institutional buildings…. He understands materials and construction, but also the importance of poetry and the power of architecture to communicate on many levels.”

Aravena and ELEMENTAL have designed the Metropolitan Promenade (1997 – ongoing) and Bicentennial Children’s Park (2012), both in Santiago. After the 2010 earthquake and tsunami that hit Chile, ELEMENTAL was called to work on the reconstruction of the city of Constitución; their work there includes emergency relief work, a master plan, Villa Verde (incremental housing, 2013), and the Constitución Cultural Center (2014). Other works include a Montessori School (2001) in Santiago, Chile; “Chairless” furniture (2010) for Vitra in Weil am Rhein, Germany; Monterrey Housing (incremental housing, 2010) in Monterrey, Mexico; Las Cruces Pilgrim Lookout Point (2010) in Jalisco, Mexico; Calama PLUS master plan (2012 – ongoing) in Calama, Chile; Writer’s Cabin for the Jan Michalski Foundation (2015) in Montricher, Switzerland; and Ayelén School (2015) in Rancagua, Chile.

Alejandro Aravena is the Director of the Venice Architecture Biennale 2016, titled “Reporting from the Front,” set to open in May 2016.

The Chair of the Jury of the Pritzker Architecture Prize, Lord Peter Palumbo, said that, as the jury visited Aravena’s projects, they felt a sense of wonder and revelation; they understood that his is an innovative way of creating great architecture, with the best yet to come. Referencing John Keats’ poem “On First Looking into Chapman’s Homer,” Lord Palumbo said, “Stout Cortez stared at the Pacific with eagle eyes, whilst the Pritzker jury felt like some watcher of the skies when a new planet swims into his ken: And although not silent upon a peak in Darien, they looked at each other with a wild surmise, captivated, stunned, and overwhelmed by the work of Alejandro Aravena and the promise of a golden future.

Watch the 2016 annoucement video at http://www.pritzkerprize.com/

Here are some of Alejandro Aravena’s completed and ongoing projects:

i) Medical School, 2004, Universidad Católica de Chile, Santiago, Chile
Photo by Roland Halbe
We were asked to do all kinds of classrooms, from seminars to auditoriums, in a very dense context. The only way out, was to go high. Given that massive student occupancy in higher floors has always been hard to solve, we decided to bring the courtyard closer to each upper floor. This building is a vertical cloister.

ii) Mathematics School, 1999, Universidad Católica de Chile, Santiago, Chile
Photo by Tadeuz Jalocha
1+2=1 ”A mathematician is a machine of transforming coffee into equations.” We thought that joke, expressed one of the dimensions by which knowledge is produced: the casual encounter of people. Besides the coffee room, we identified the corridor as a design opportunity, as the moment where you see other people before they disappear into the isolated retreat of the individual working unit. We decided to add the new building to two existing ones, so that after the operation we had fewer elements than at the beginning. 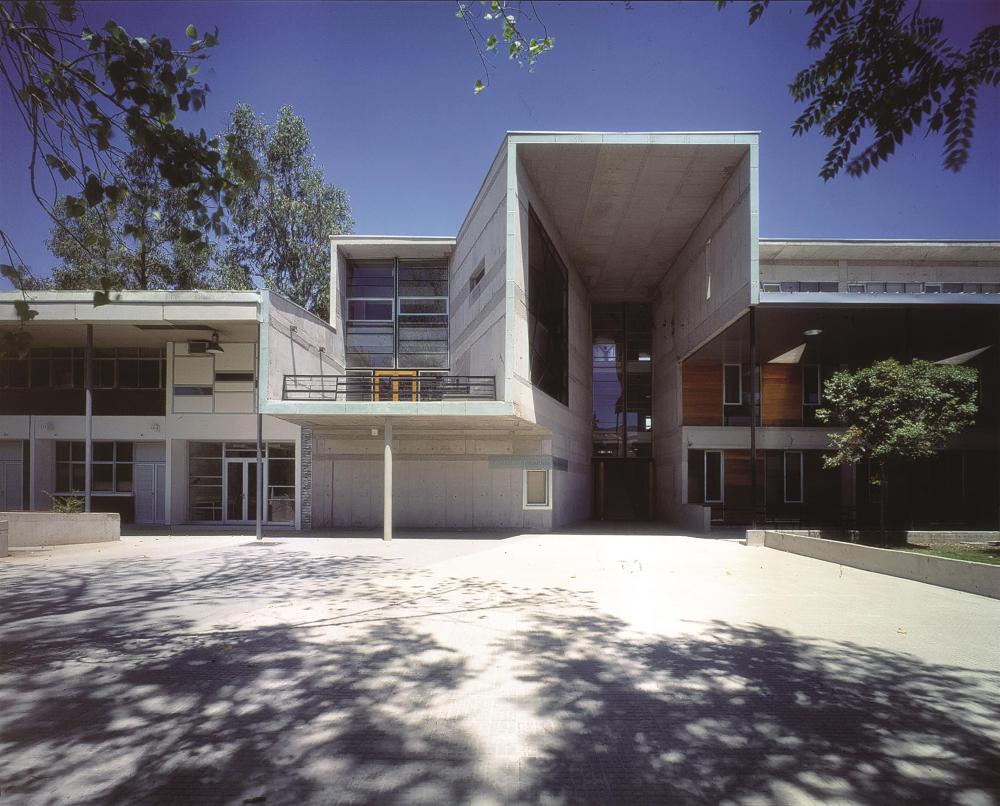 iii) Novartis Office Building, 2015 (under construction), Shanghai, China
Photo by ELEMENTAL
The office building in the Novartis Campus Shanghai seeks to provide spaces that encourage knowledge creation. The office spaces are designed to accommodate the different modes of work — individual, collective, formal and informal — and foster interaction between the users. Around a forest of Metasequoias, the ground floor accommodates the Fitness and Be Healthy Center which are part of the campus public level where users from the different buildings meet. The outside of the building responds to the local climate with a solid facade of reclaimed brick facing south, east and west. On the north facade, the building is open to let indirect light get inside the open office spaces.

iv) Siamese Towers, 2005, San Joaquín Campus, Universidad Católica de Chile, Santiago, Chile, University classrooms and offices
Photo by Cristobal Palma
We were asked to do a glass tower. Glass is very inappropriate for Santiago’s climate, because it generates green house effect, even though it’s a nice material to resist rain, pollution and aging. So we thought of using glass for what it’s good, on the outside, then do another building inside with efficient energy performance and allow air to flow in between the two. Convection of hot air creates a vertical wind which is accelerated by the “waists” of the building by Venturi effect, eliminating undesired heat gains before they reach the second building inside. 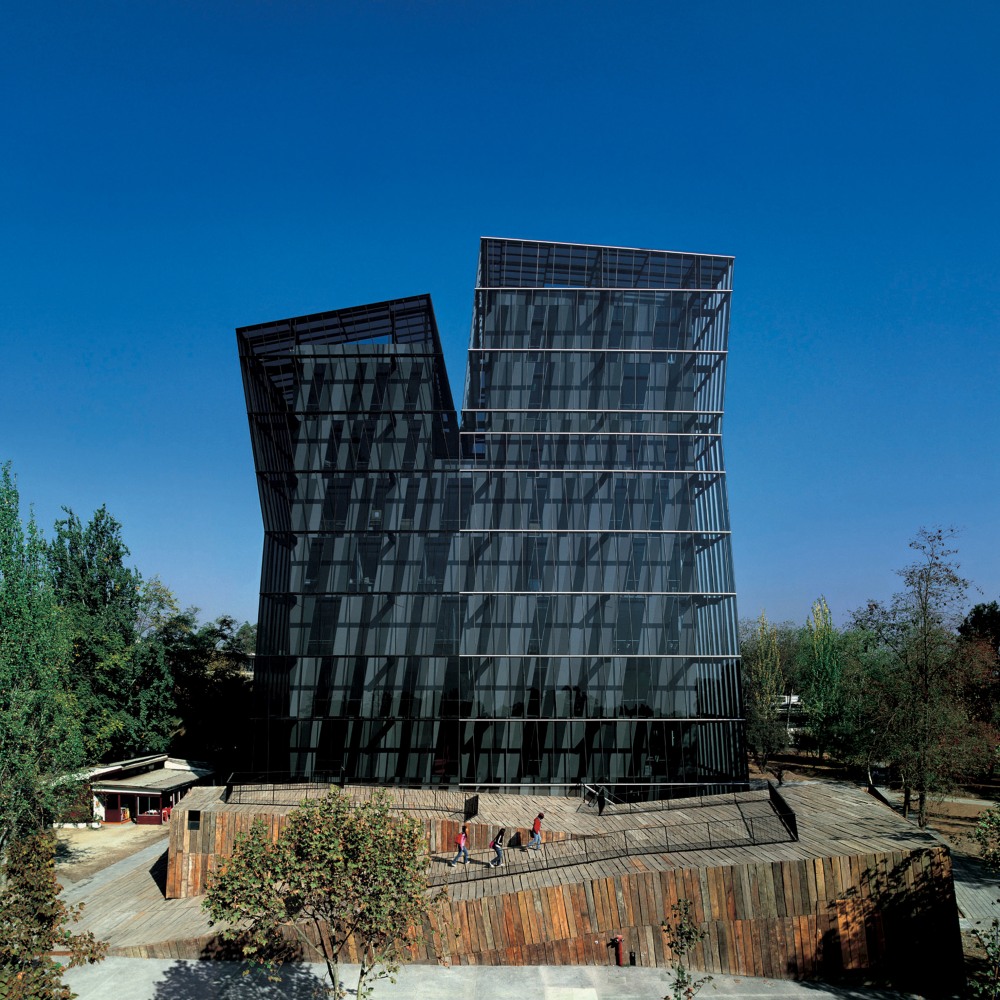 Alejandro Aravena was born on June 22, 1967, in Santiago, Chile. He graduated as an architect from the Universidad Católica de Chile in 1992. In 1994, he established his own practice, Alejandro Aravena Architects. Since 2001 he has been leading ELEMENTAL, a “Do Tank” focusing on projects of public interest and social impact, including housing, public space, infrastructure, and transportation.

ELEMENTAL has built work in Chile, The United States, Mexico, China and Switzerland. After the 2010 earthquake and tsunami that hit Chile, ELEMENTAL was called to work on the reconstruction of the city of Constitucion, Chile. Aravena’s partners in ELEMENTAL are Gonzalo Arteaga, Juan Cerda, Victor Oddó and Diego Torres.

Alejandro Aravena is the Director of the Venice Architecture Biennale 2016. He was a speaker at TEDGlobal in Rio de Janeiro, Brazil, in 2014. He was a member of the Pritzker Architecture Prize Jury from 2009 to 2015.

In 2010 he was named International Fellow of the Royal Institute of British Architects and identified as one of the 20 new heroes of the world by Monocle magazine. He is a Board Member of the Cities Program of the London School of Economics since 2011; Regional Advisory Board Member of the David Rockefeller Center for Latin American Studies; Board Member of the Swiss Holcim Foundation since 2013; Foundational Member of the Chilean Public Policies Society; and Leader of the Helsinki Design Lab for SITRA, the Finnish Government Innovation Fund.

He was one of the 100 personalities contributing to the Rio +20 Global Summit in 2012. Aravena was a Professor at the Harvard Graduate School of Design (2000 and 2005); and also taught at Istituto Universitario di Architettura di Venezia (2005), Architectural Association in London (1999), and London School of Economics. He has held the ELEMENTAL Copec Chair at Universidad Católica de Chile since 2006.